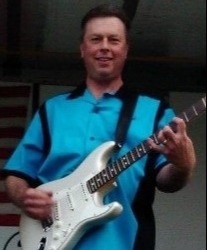 Mr. Bernie Edward Phillips, II, 63, of Mount Airy, passed away unexpectedly on Friday morning, May 6, 2022.  He was born November 26, 1958, in Surry County, the son of the late Bernie Edward and Josephine Atkins Phillips.  Edward graduated from Mount Airy High School in 1977, and he was the owner and operator of Surry Painting.  He was an accomplished guitar player, having played in many bands in our area.  He is survived by his wife of 41 years, Janet Ayers Spencer Phillips; two sisters and brothers-in-law, Louise and Rickey Sawyers and Kathy and Dale Mabe; a brother and sister-in-law, Paul and Jennifer Phillips; his nieces and nephew, Amanda Norman and her husband, Cody, Ben Phillips, and Ryleigh Phillips; a great-nephew, Colt Norman; and his mother-in-law, Rachel Spencer.  In addition to his parents, Mr. Phillips was preceded in death by his father-in-law, Bernie Spencer.  The funeral service will be held Monday, May 9, 2022, at 2:00 PM at Moody Funeral Home Chapel in Mount Airy, with the Rev. Rusty Reed and the Rev. George Randall officiating.  Interment will follow at Oakdale Cemetery.  The family will receive friends Monday from 12:30 PM until the hour of the service.  Memorial contributions may be made to YVEDDI, P.O. Box 309, Boonville, NC  27011.

To order memorial trees or send flowers to the family in memory of Bernie Edward Phillips, II, please visit our flower store.