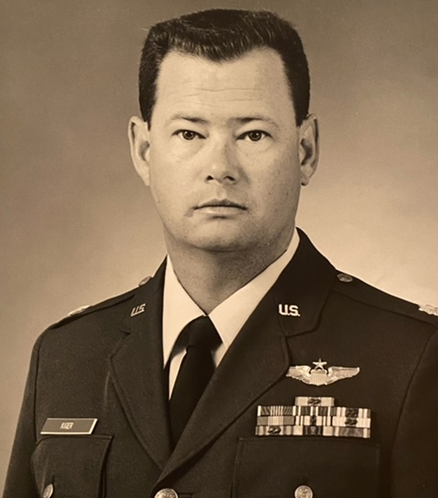 Lt Col Keith Edwin Kiger, USAF retired was born on June 6, 1957, at Eglin Air Force Base, Niceville, FL. The son of Charles (Chuck) Kiger and Virginia Boyd Kiger, he passed at his home in Okeechobee, FL on Sunday, June 5, 2022.

Growing up in an Air Force family, his love of flying began as a young boy standing by the flight line. From that moment he knew that would be his lifelong ambition.

He attended Western Carolina University and upon graduation in 1979, entered the United States Air Force flight training program. As a fighter pilot, he went on to fly the F-4 Phantom, and F-16 Fighting Falcon and received numerous accolades for his stellar leadership and performance during critical missions.  His duty assignments spanned Germany, Italy, Turkey, and Egypt and his combat experience was gained through serving in both Gulf Wars and the Bosnian War. He also received numerous awards for aviation superiority and leadership.

After serving in the Air Force for 26 years, he continued to serve his country as a flight program manager in Kabul, Afghanistan for five years, providing leadership in support of coalition goals to improve the establishment of the Afghan Air Force.

An adventurer at heart, Keith loved traveling and immersing himself in different cultures and his humanity was far reached. He was an avid outdoorsman that loved camping, hunting, fishing, and golf. He had a great love for his family, friends, and country that was unparalleled. Even though his travels spanned the globe, his heart always led him back to the Blue Ridge Mountains.

A Celebration of Life will be held on Sunday, June 12, with visitation at 12 PM and service at 2 PM at Moody Funeral Services Mount Airy. Burial to follow at Oakdale Cemetery with graveside rites conducted by Seymour Johnson Air Force Base Honor Guard. Service will be officiated by the Rev. Harry Sherrill. In lieu of flowers, memorials may be made to the Wounded Warriors Project, 1990 Fordham Dr., Suite 100, Fayetteville, NC 28304.
To order memorial trees or send flowers to the family in memory of Lt Col Keith Edwin Kiger, please visit our flower store.
Send a Sympathy Card