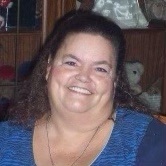 Our beloved sister, mother, grandmother, great-grandmother, aunt and friend has passed away. Kim Layne Midkiff Brown was born 24 May 1957, in El Paso, Texas, to James Powell and Hassie Corrina Hawks Midkiff. She passed on to the Glory of our Lord on Monday, 18 April 2022 at the Joan & Howard Woltz Hospice Home in Dobson, NC. She had been in declining health for several years, but was always cheerful, loving and filled with faith in God. Kim  joined the US Navy in 1977 and trained as a "Seabee" in Gulfport, Mississippi. The Seabee nickname is a heterography of the initial letters "CB" from the words ``Construction Battalion". As the United States Navy’s construction arm, the Seabees go anywhere and build anything that can be built, often in harm's way. Kim was among the first women recruited for and who completed Seabee training. During her stint in the Navy, Kim married Mike Brown.  She and Mike split their time between North Carolina, Alaska, Washington state and Oregon. When she was discharged from the Navy and moved back to North Carolina, Kim resumed a job she held at Brown-Wooten mills, later known as Nester Hosiery. Kim is survived by her daughter, Tiffiany Midkiff of Mount Airy, NC; her grandson, Dustin Charles Johnson and his son (Kim's great-grandson), Phoenix Johnson; her granddaughters, Adrianna (Dylan) Faw; and Courtney Wall (Nevin Mills): and her sisters, Donna M. Sutphin of Dobson, NC; Kathy M. (Doug) Goins, Debra M. (Tony) Stoltz of Mount Airy and a brother, James (Lisa) Midkiff of Chesapeake, VA; her aunts, Inez (David) Bowman and Rhonda (Johnny) Ables; as well as many nieces and nephews, and her loving fur baby "Ladybug". She was preceded in death by her husband Mike Brown; her parents, James and Hassie Hawks Midkiff; a brother Powell Ray Midkiff; and a sister Anita Midkiff Van Fleet.  Funeral arrangements, services will be held Friday, at 2:00pm at the Moody’s Funeral Chapel in Mt. Airy.  Family will receive friends one hour prior to the service at 1:00pm.

To order memorial trees or send flowers to the family in memory of Kim Layne (Midkiff) Brown, please visit our flower store.